Smartify your plant: Making production systems increasingly powerful and thus prepared for the future has become a trend. At its Plant 15 in Feuchtwangen, Germany, REHAU has completely restructured procedures as well as the machine pool. The plant now features the maximum level of technology.

When thinking about "smart production," the first thought that comes to mind is usually the digital realm exclusively: the communication of machines, the collection and evaluation of data. At times, it can be easy to forget that the right hardware has to be in place before IT can optimize production results. In Feuchtwangen, REHAU has proceeded in especially great detail over the past year. Beginning with the hardware, the team headed by Project Manager Matthias Laber has made bumper production "lean" - and thus, prepared for the future - in several expansion stages. And just like during open heart surgery, this took place at full load.

Production that has grown organically always reflects some of its development. Machines are put where there is room for them, and the travel paths and transport routes result from this. In times of ever smaller batch sizes and the frequent mold changes that result, this organic positioning of machines can become a problem, because space and time are often used ineffectively. In addition, components themselves are becoming more complex and have more parts, thereby requiring more space.

Now, when people enter the hall in question of Plant 15, they see right away that everything here is synchronized. The KraussMaffei GX series injection molding machines are positioned with the least possible spacing, being precisely aligned alongside one another longitudinally. The fixed clamping platens of all machines are situated in a line, because a latticed area extends above the systems that contains the circulatory system of production: the complex automation system.

LRX 350 linear handling robots remove the articles with shot weights from 200g to 1000g and stack them on trays, or flat goods carriers, which move in a double-decker conveyor system. When the desired part quantity is reached, the filled tray is lowered through a shaft into the lower level and an empty tray takes its place. First, the articles make their way into buffer storage, and from there to packaging or further processing.

Incidentally, in a new innovation for linear handling robots, a fully automated gripper change has been implemented which was previously reserved for six-axis robots only. The mold setter simply hooks the next gripper into a rotary feedthrough and if a product change-over is pending, the handling system accepts it automatically. 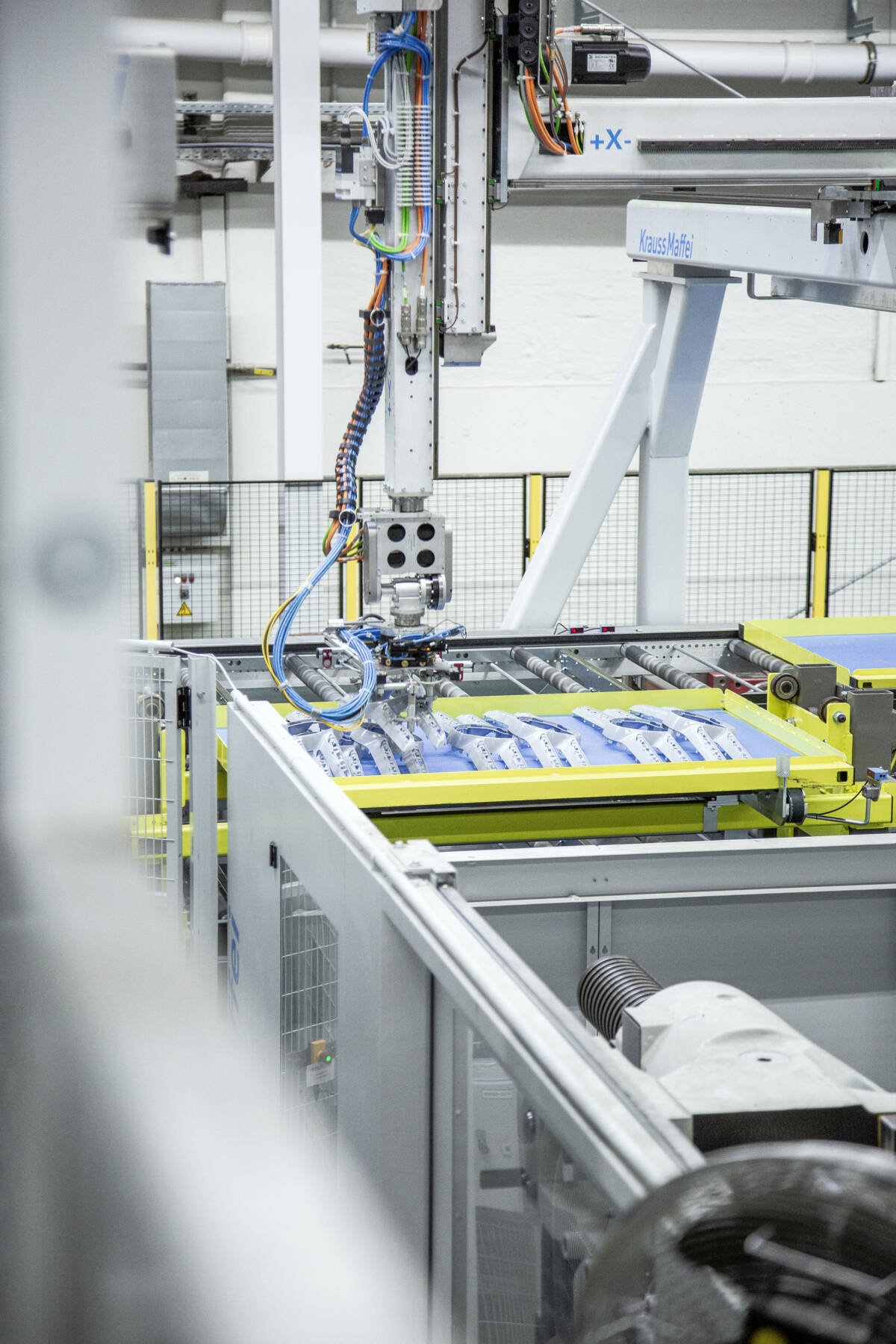 Optimal use of space for injection molding machines and molds

The space-saving two-platen design of the GX answers the call for the best possible use of space. Magnetic clamping plates and multicouplings accelerate setup, and equipment packages for MuCell or injection compression molding create space for special applications. Frank Burkhardt, who oversees the project for KraussMaffei, says, "If you take the entire system with automation into consideration, you have to say that in the medium clamping force range, the abundance of technology per square foot is unmatched. It's not possible to have more."

"If you take the entire system with automation into consideration, you have to say that in the medium clamping force range, the abundance of technology per square foot is unmatched. It's not possible to have more."
Frank Burkhardt, Sales IMM, Sales- and Sercivecenter Germany South, KraussMaffei 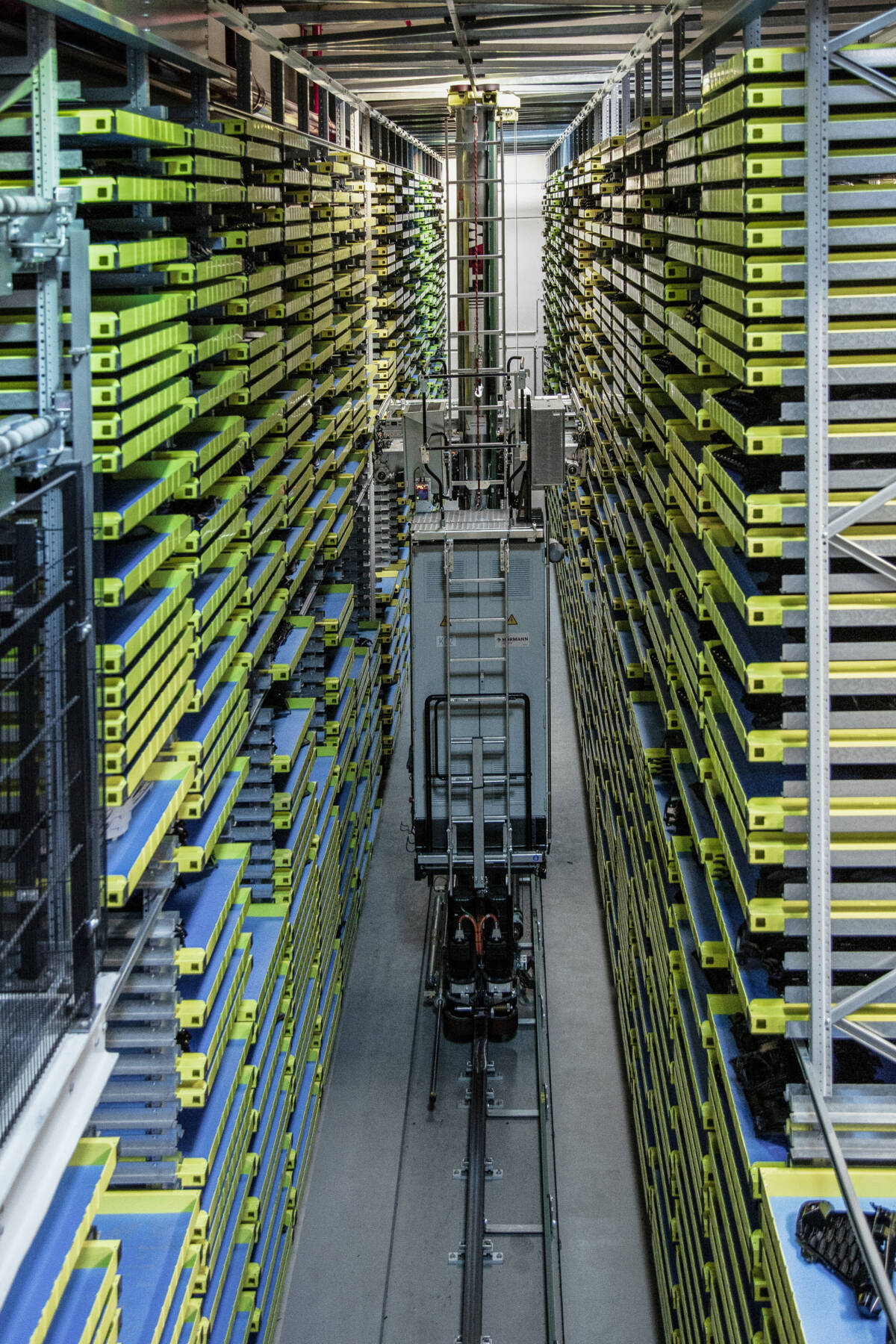 High-bay storage is the buffer between component production and either further fabrication or packaging.

Directly at the rear side of the row of machines, approximately 200 molds, positioned close together, catch the eye. They were the actual starting point for the entire project.

Plant Manager Dr. Thomas Siggenauer recalls: "We produce around 1300 different articles throughout the entire plant and would have needed to build a new mold storage facility. From this need came the idea to begin a new strategy: streamlining the product portfolio, positioning the machines closer to each other, and avoiding unnecessary costs with automated yet flexible hardware."

" As a result, the investment amount of several million euros is paying for itself. Setup was also greatly simplified thanks to the mold storage, which is located close to the machines. The new crane lifts the mold directly from the storing position into the machine - and it does so frequently, since the order lead times of the articles vary between just 2 and 16 hours.

Further optimization is already being planned. This calls for the mold change to be automated to the greatest extent possible by means of couplings.

The increasing variety and complexity of components

Here, it is primarily the "undergarments" of bumpers that are produced on the line day and night, or in other words the support components which give the bumper covering its stability. Most commonly composed of polypropylene, they are sometimes fiber-reinforced or physically foamed. These articles, designated by REHAU as "black parts," feature complex geometries but are not visible after they are installed. They can be stacked without any loss of quality, which was the prerequisite for the entire concept.

While earlier, the bumper of an automobile consisted of four or six individual components, today 30 to 50 are required as the variety of features continuously increases. Halogen or LED headlights, cleaning nozzles, design elements of contrasting color and much more are involved here. Some 80 percent of the parts fabricated in this hall are subsequently processed by REHAU, whether in Feuchtwangen or at the company's own logistics centers.

High willingness to assume risk and teamwork pay off

Because of this, the production reconfiguration was a high-risk venture. After all, the heart of production should continue to beat regularly and pump out components - maybe even at a sprint. Additionally, as a result of the process change, all affected articles - approximately 400 - had to be resampled and accepted by the customer. REHAU delivers to all German and many international OEMs. As such, the project team placed great value on risk management, which included supplier selection alongside numerous simulations. Since KraussMaffei had already provided the majority of the machines in the plant before the reconfiguration, collaboration was an obvious step. 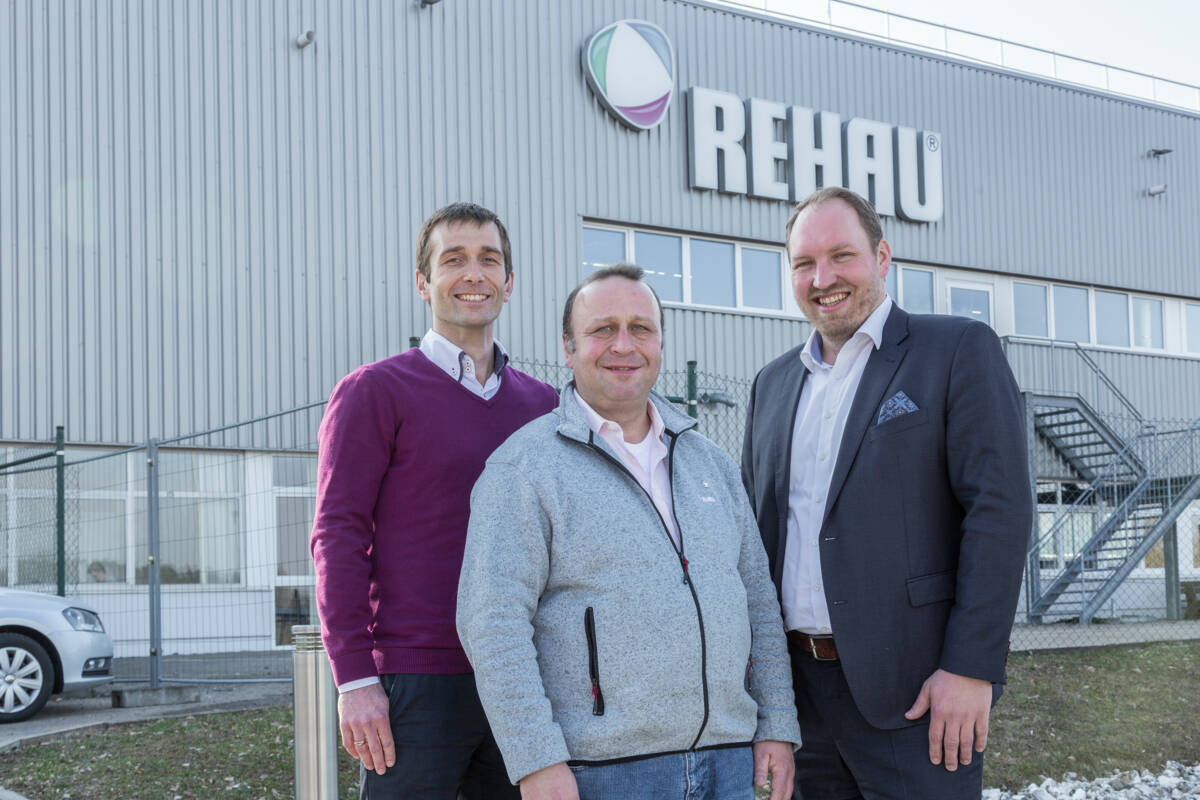 The modernization team (from left):

"If you are already familiar with people and system landscapes before carrying out such a complex undertaking, this makes it go much more smoothly."
Matthias Laber, Project Manager

Holding monthly meetings to discuss construction progress ensured that everyone was moving in the same direction and dealing with unforeseen situations effectively. One situation arose when the renovation of the hall floor took longer than expected, forcing KraussMaffei to deliver its machines later than initially planned. Laber says about this, "The collaborative effort between our companies was, as always, based on partnership and took place on equal terms. We both had the desire to improve each other with the project."

REHAU entered upon new ground in other respects, namely with the fully automated packaging cell, which is located in a neighboring hall. The stacked components go from buffer storage to the fully automated packaging cell, and from now on are to be made ready for further transport in small load carriers by two six-axis robots. Currently, the processes are being defined and the cell set up. At the same time, employees fabricate components while being supported by the transport system, for example by the attachment of metal clips and simple fittings. This way, workstations that were previously located directly adjacent to the injection molding machines were relocated to a quieter environment. As a result, the employee response to the redesign was positive across the board.

Likewise, just as the end of the process chain had been reorganized, its beginning was as well. A central material supply with dryers and a silo and octabin connection transported the approximately 50 various types of polymers to their location of use. 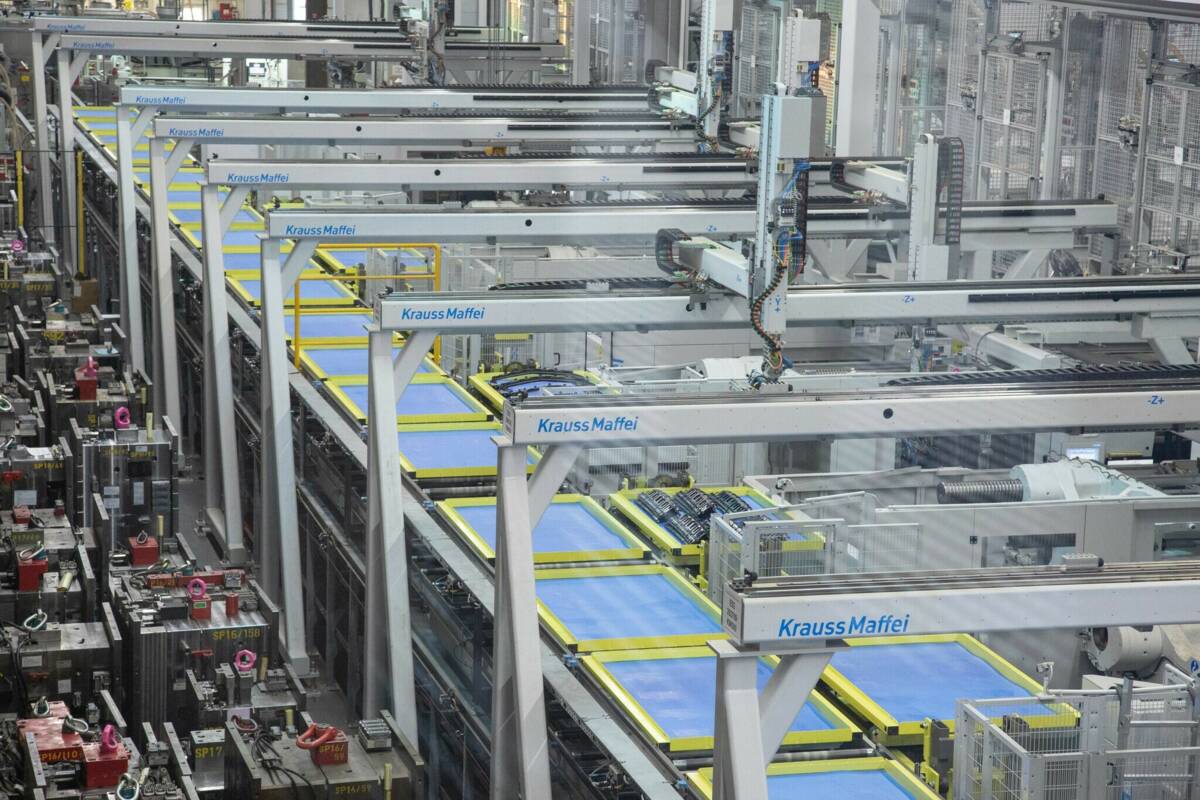 Every square inch is used productively:

While Laber and his colleagues have made solid progress, the restructuring is still far from over. Further injection molding machines are planned for the medium term to grow the buffer storage by 50%. This completes the first expansion stage and production in this hall area is in an absolute "lean" state in terms of hardware. Next, the moment for Industry 4.0 to shine is at hand.

Since REHAU is currently working on a new machine input (MI) system, the various previous systems are being replaced. This integrated solution will streamline and standardize processes and logistics operations at all REHAU automotive plants. As a result, even more benefit can be gained from the existing functions of GX injection molding machines, such as APC plus and DataXplorer.

APC Plus ensures extreme consistency in component weight, thus ensuring excellent product quality by controlling the changeover point from injection pressure to holding pressure, as well as the holding pressure level, from shot to shot. This is especially helpful in the event of batch fluctuations or other external interference factors. In turn, the DataXplorer is equipped with a unique, detailed view into the depth of the process by recording up to 500 signals per second as continuous curves. Both help to make machines self-optimizing and to reduce costs for quality assurance.

This is fully consistent with Siggenauer's approach. He envisions a master control station for his plant in Feuchtwangen that gives an IT-supported response to requisition orders—with semi-automatic production planning and fully automated execution. "As a result of competing processes and batch sizes as well as cost factors that are always changing, it becomes ever more difficult for the human brain to configure processes of production logically. Quite simply, a computer-supported system can do this better. Additionally, my vision is that in 15 years or so, we will no longer use forklifts for transport within the work premises and everything will run in automated fashion."

He reckons that 40 percent has already been completed - and he still has a good 15 years of time for the rest.