For 131 years, the Chiemsee Rail has been transporting tourists from the Prien train station to the Prien/Stock Harbor. It was built by one of our two founder companies Krauss & Comp. in 1887, by the order of Ludwig Fessler, a shipping operator who lived on the Chiemsee. Klaus Adelsperger, Senior Department Head for Installation and Control Engineering at KraussMaffei Automation, jumps into the story along with his good friend and descendant of Ludwig Fessler.

When Klaus Adelsperger, longtime employee at KraussMaffei Automation, got KraussMaffei's 180th yearbook in his hands and began to read, he stumbled across the story of the Chiemsee Rail. It was commissioned by Ludwig Fessler in 1887 and was equipped with a steam engine from Krauss & Comp. "I have already been with KraussMaffei for a tenth of its company history, so 18 years now. And because I have been friends with the Fessler family for a long time now, I immediately thought to give the book to my good friend Michael Fessler as a gift. After all, this now 131-year-old locomotive is still in operation," Adelsperger remembers.

"It was all 'Kini's' fault," says Michael Fessler, descendant of the founder of the Chiemsee Rail, Ludwig Fessler. King Ludwig II of Bavaria ("Kini") was a professed fan of the French "Sun King" Louis XIV and of course, of the Palace of Versailles and in arranging the building of a replica, Herrenchiemsee Palace was born. However, Ludwig II died during construction in 1866 and the work was stopped. His successor, Luitpold, Prince Regent of Bavaria allowed visits to the half-finished construction. A true sensation in the era of the monarchy and also the start of the tourism business at Chiemsee. From the first day, masses of visitors came by train from Munich to Prien on the Chiemsee. The last stretch from the train station to the harbor, however, still had to be traveled by foot. The residents of Prien who a horse and carriage at their disposal, sensed a business opportunity and offered travel by carriage for that last stretch. This quickly led to downright traffic chaos and a few accidents. "My ancestor Ludwig Fessler and former shipping operator on the Chiemsee, decided to end the chaos by building a railroad," says Michael Fessler. 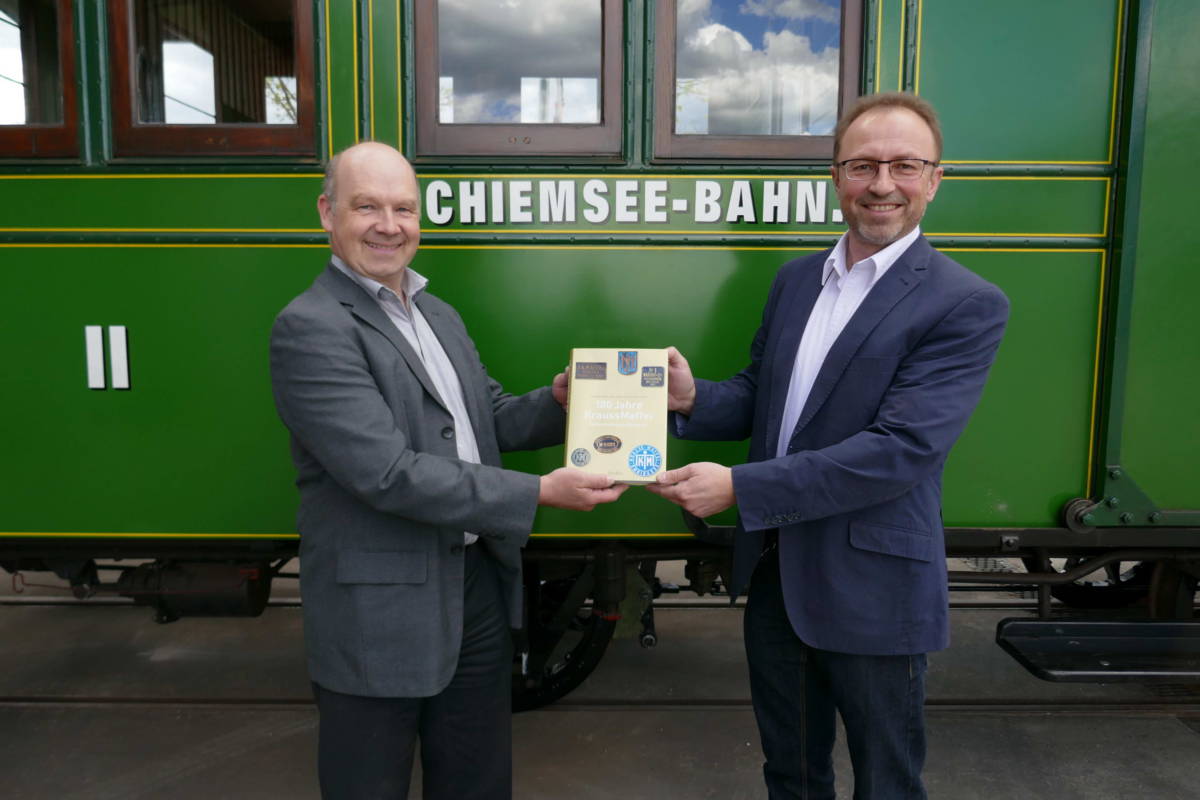 Without KraussMaffei, there would be no Chiemsee Rail:

Michael Fessler (left) and KraussMaffei employee, Klaus Adelsperger, are excited about the 180 year anniversary of the company from Munich and its rich history.

Due to its experience with narrow-gauge railways, the Munich locomotive factory, Krauss & Comp. won the contract for the planning. Thus, the "Chiemsee Rail Fessler & Co." was created together with Georg Krauss in 1887. The Localbahn-Actien-Gesellschaft (LAG) took over construction; a subsidiary founded only shortly before that specialized in the construction of new rails. "The name is known today due to the merger with J.A. Maffei, today's KraussMaffei Group," observes Adelsperger. Krauss & Comp. began construction on a tramway (box locomotive) that was one-of-a-kind, both for the time and for the next 100 years. Due to its low purchase and operating costs, as well as the option to have only one person operate the locomotive, was ideal for the narrow-gauge Chiemsee Rail line. "The 60 metric horsepower locomotive functions today as it did then, as a two-cylinder saturated-steam machine with one-step expansion and is controlled with the 'Stephenson' model control system. This means that valves are on the left side when looking from the firebox, which allows for operation by one person. The coal supply is located in a box behind the firebox and the water in a tank between the frame side girders of the truck. With the exception of the installation of a steam turbine for electric lighting and a steam-driven air compressor for the pneumatic brake and compressor exchange in 1957/58, the locomotive is technologically the same as it was on July 9, 1887 when it began operation. 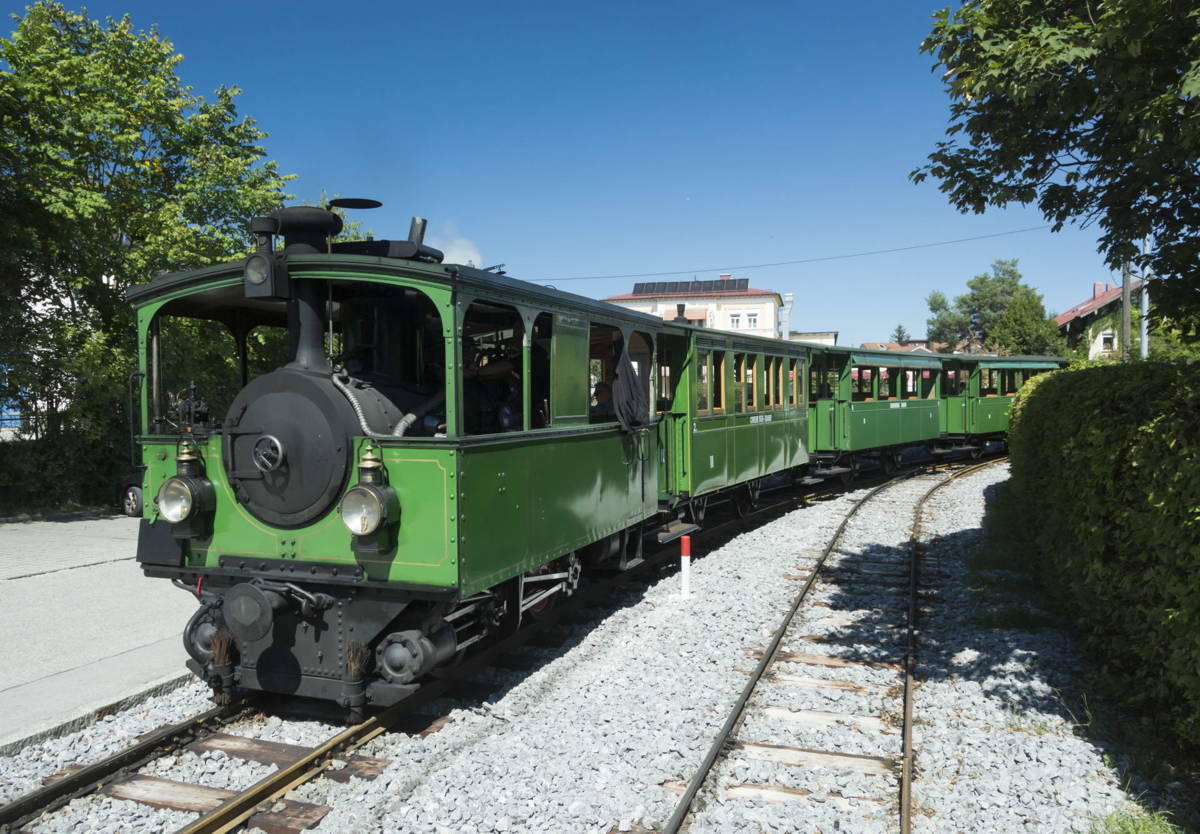 The Chiemsee Rail transports tourists from the Prien train station to the Prien/Stock Harbor.

"In 2018, its 131st year of operation, the steam locomotive is undergoing a substantial inspection so that both young and old guests can enjoy it for decades to come," according to Fessler. "Of course there will regularly be one or two inspections, but the locomotive is still functioning. For me, it's a sign of how well the mechanical engineering had already developed at that time and testifies to the quality of the locomotive. It is a sort of living witness to the history and expertise of KraussMaffei," says Adelsperger.