With the 100th injection molding machine, KraussMaffei is delivering a special machine to a special customer – Polycom, a family-run company founded 35 years ago by two brothers, which has established itself as a leading plastic processor for the automotive component supplier industry.

The all-electric PX 50-55 with the special paint is part of the modern smart production at the new location in Dobje, Poljane nad Skofjo Loko/Slovenia. "We have been benefiting from the innovative products and the tailored service provided by KraussMaffei for decades. We are now delighted with the 100th injection molding machine from our long-term partner," explains Iztok Stanonik, founder and Chairman of the Management Board of Polycom. "This is a powerful symbol both for our good cooperation with KraussMaffei and its Slovenian agency KMS, and for the sustained growth of our company, adds Igor Stanonik, Member of the Management Board. 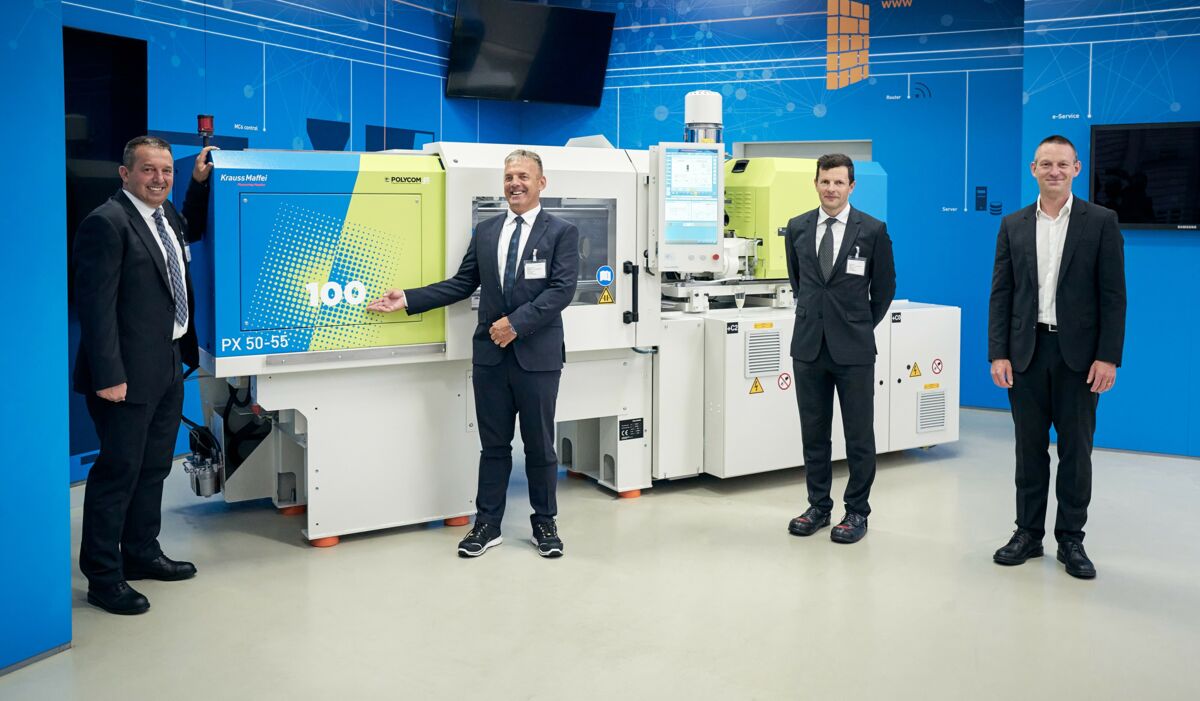 KraussMaffei delivered the first injection molding machine to Polycom 25 years ago. The new all-electric PX 50-55 (clamping force 500 kN) now supports the modern production at the new location in Dobje, which was built in 2017. With its portfolio, Polycom serves above all the automotive component supplier industry, and increasingly also other branches of industry.

"Digitalization, smart production and rapid connection to the Euromap 63 are important components of our company and growth strategy."
Iztok Stanonik, founder and Chairman of the Management Board of Polycom.

The focus is on smart production, transparency and the tracking of data throughout the entire process, in order to meet the increasingly high quality requirements. It is therefore all the more important that the injection molding machines produce precisely and reliably. In addition to the proven machine function APC plus (Adaptive Process Control), the new PX 50-55 also has the DataXplorer, a data analysis tool which records at least 500 and up to 800 signals every 5 ms as absolute values and curve progressions, depending on the configuration, and thus comprehensively documents the production processes. In event of service cases, the new service app provides virtual and rapid support via smartphone or tablet, thus ensuring continuous production.

"Digitalization, smart production and rapid connection to the Euromap 63 are important components of our company and growth strategy. We will therefore invest here in a targeted manner in future," said Iztok Stanonik. And the next investment wasn't long in coming: In the course of the ceremonial handover of the 100th anniversary machine, Polycom ordered four more injection molding machines from KraussMaffei.

In the 35 years since the family-run company was founded by Igor and Iztok Stanonik, it has developed into a successful large enterprise that today counts almost 300 employees. In the beginning, Polycom worked with two injection molding machines to produce very simple plastic products such as handles, ash-trays and similar small components. Today, the modern machine pool consists of more than 100 injection molding machines. With its comprehensive portfolio of complex and demanding plastic components, Polycom serves numerous renowned automotive component suppliers and other branches of industry far beyond the borders of Slovenia.    www.polycom.si