And don’t forget, everything Roth makes is guaranteed to work!” This is the promise heard by callers to the central Roth Werkzeugbau switchboard in the hold message. This thoroughly self-confident telephone message expresses the company’s high standards for its own quality. “We either do it right or not at all. That’s our motto,” states Marco Roth, the second-generation proprietor of the family-owned company. His father, Rainer Roth, took advantage of the possibilities opened up by German reunification and founded the company from scratch in 1990. The first employees went to work in his barn. This sounds a little like a hip start-up story from Silicon Valley, but in fact took place in the tranquil area of the Auma-Weida valley in Thuringia, Germany, a region that is mostly farmland. 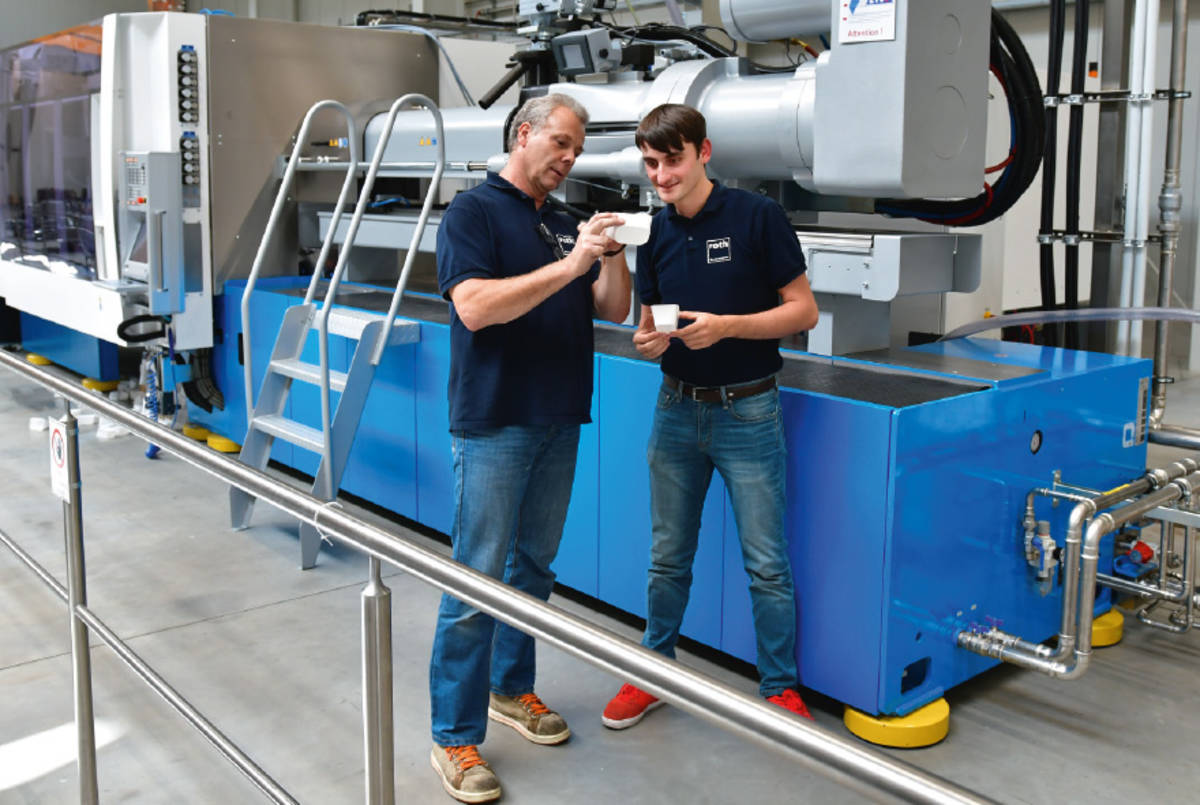 Industrial moldmaking with a high degree of automation

Notable progress has been made in the 27 years since the ­company’s founding. The family-owned company has a staff of 140, making it one of the most important employers in the region. Despite its great success, the company remains modest and would prefer not to add any more staff. “We don’t want to become an anonymous mass-production factory. We have reached a size that is manageable and still facilitates personal cooperation and collaboration,” says Roth. Precision molds with a total weight of up to 14 tonnes are manufactured in shifts on state-of-the-art systems in an operating space of 20,000 square meters. The family-owned company depends on streamlined organization with clear structuring as well as a high degree of automation. This way they achieve an efficient production process that yields continuously comparable results. In addition, individual post-mold finishing of components is reduced to a minimum. “For us, industrial mold­making means that all molds are manufactured according to an exactly structured process. This way we ensure a consistent level of quality in accordance with the requirements of the customer,” explains Roth.

“With Netstal we have the right ­business partner at our side.”
Marco Roth, CEO Roth Werkzeugbau

With packaging applications, Roth is developing a second strong mainstay next to the automotive industry. Today, the packaging area already contributes approximately 20 percent to the overall sales of the company. In the coming years, plans call for that percentage to rise to 50 percent. For Marco Roth, the central component for ­implementing this strategy is the company’s own TechCenter. “­Customers want more from us today than just a mold. We support them in making their injection molding processes more efficient. Not least of all, our longtime partner­ship with the KraussMaffei Group contributes to this by supporting us with expertise in the packaging area and covering the entire range of injection molding machines – all the way to the manufacturing of extremely thin-walled parts.” Many technical applications are tested on the four injection molding machines from KraussMaffei. Then, molds for disposable and reusable packaging in the thin-walled range as well as higher wall thicknesses were added about five years ago. 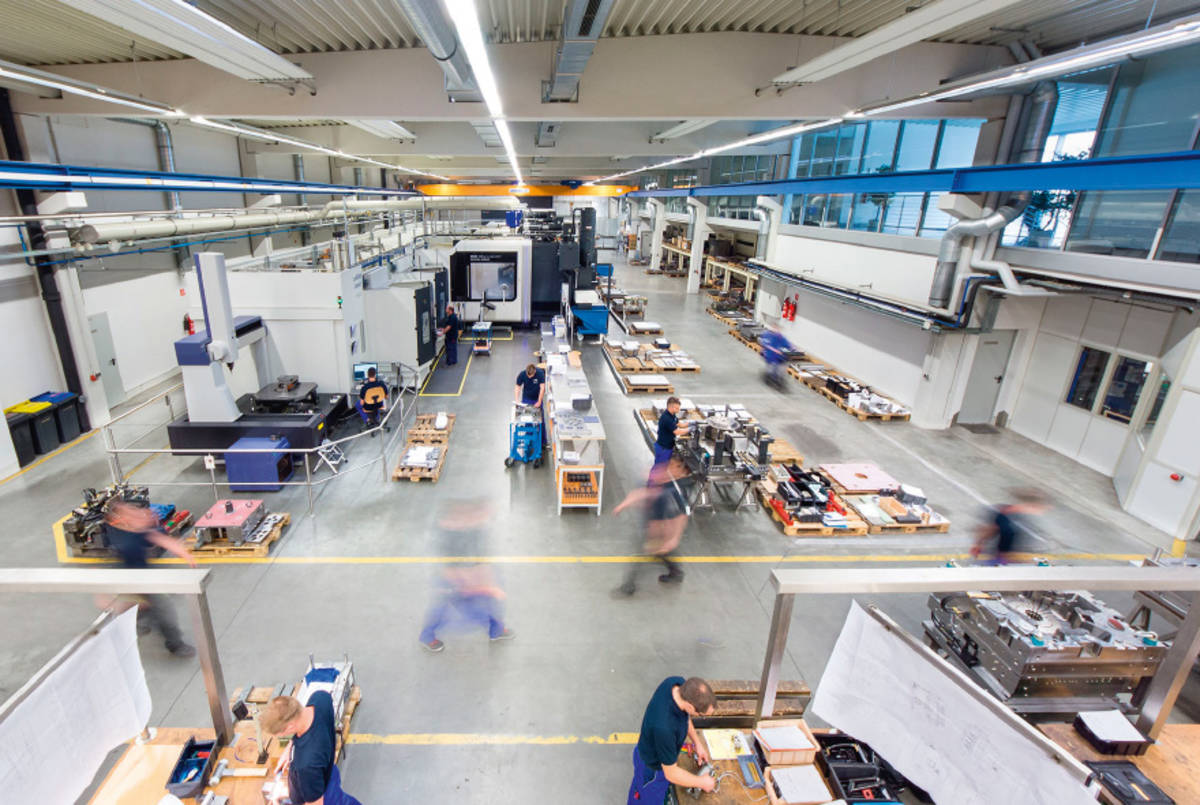 Precision molds with a total weight of up to 14 tonnes are manufactured in shifts on state-of-the-art systems in an operating space of 20,000 square meters.

This was followed in 2016 with the addition of two fast, high-­precision EVOS injection molding machines from Netstal. Molds for thin-walled articles are tested on these under production conditions and developed until series production. Between the two machines with 350 and 550 tonnes of clamping force there is a highly flexible articulated arm robot for inserting in-mold labels (IML) and demolding the finished articles. Together with ­KraussMaffei Automation, a special solution was developed that optimally matches the requirements in test operation by a mold maker while also allowing for short cycle times. In IML applications the label is inserted into all cavities, which is an absolute novelty in the area of moldmaking. After the optimization phase, each mold completes a performance run and acceptance run on one of the company’s own two EVOS machines. This eight-hour test operation is fully automated in order to model a close-to-production and reproducible production cycle.

To conform to the trend toward thinner and thinner wall thicknesses, Roth wants to try Netstal’s further-developed injection compression molding process soon. “Our Netstal machines are ready for that. Now we have to build up the corresponding process knowledge to support our customers to that end. With Netstal we have the right business partner at our side,” Roth says in closing. 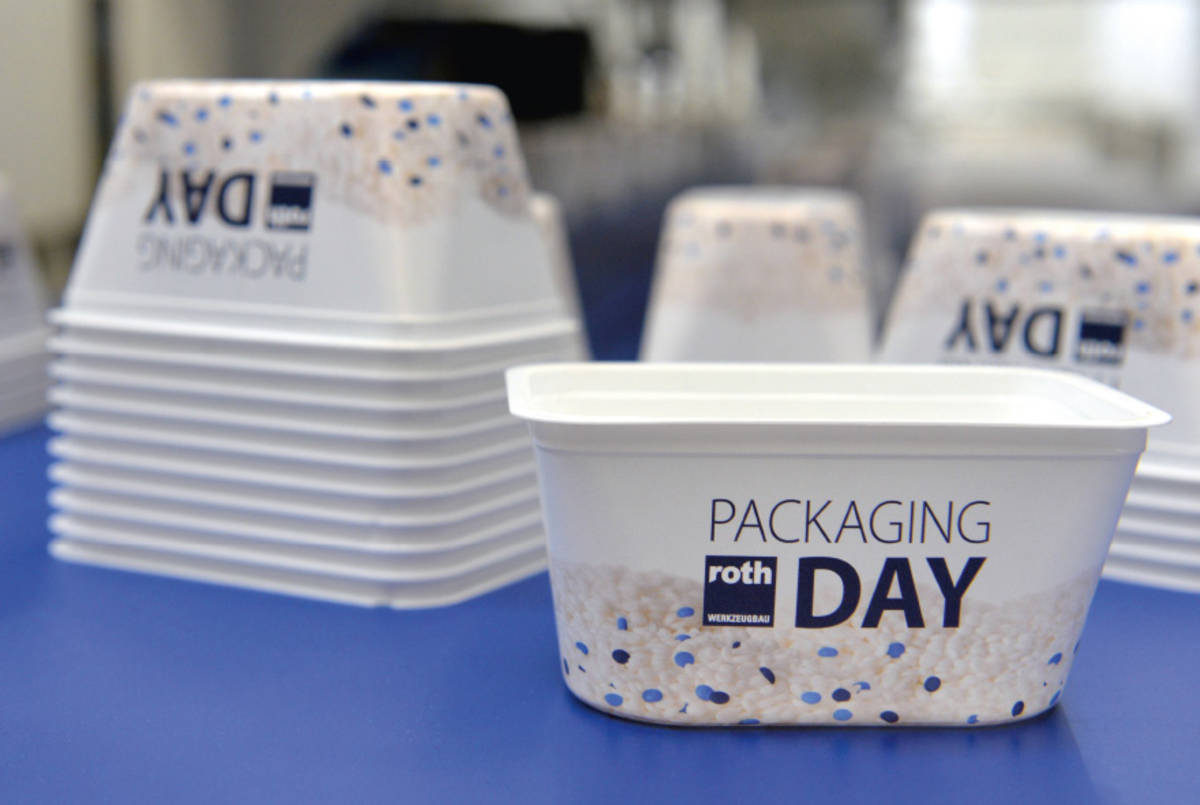 Showing what you can do

Roth Werkzeugbau demonstrated the mold validation for an IML-decorated cup with a wall thickness of 0.4 mm.

Go-ahead for the packaging market

Roth Werkzeugbau greeted more than 80 visitors on May 23, 2017, in its spacious TechCenter at the headquarters in Wöhlsdorf, for the first “Roth Packaging Day.” With this event, the company from Thuringia marked its official entrance into the packaging market. Marco Roth, Managing Director of the family-owned company, reported at the beginning of the event that they have been intensively dealing with the particularities of packaging molds for about five years and have already completed their first projects, which has also definitely involved learning the hard way. Now they have gained enough experience to make the official beginning. The goal is ambitious: In five to ten years, they want half of the sales volume to be generated with packaging applications. In the companyʼs own TechCenter, the validation of a four-cavity mold for rectangular cups with IML decoration on their entire surface was demonstrated on an EVOS 3500. The market entry of Roth Werkzeugbau produces interesting options for German producers in particular. Many important packaging manufacturers are at home within a radius of about 300 km around Auma-Weidatal.