Spray caps, aerosol valves, dispensing pumps. If you want to produce mass products like these successfully, you have to tune your production to maximum efficiency. The Italian Coster Group has been proving this for over 50 years.

On the way to the Coster production facilities, shortly after having left the Brenner highway near Trento, one could almost forget that this is a trip for work. In a picturesque setting at Lago di Caldonazzo, surrounded by wooded mountain and cliff ranges – the southern foothills of the Alps – one can find the two towns of Caldonazzo and Calceranica al Lago, which are both heavily influenced by tourism. A northern Italian paradise fit for a postcard that makes one long for a vacation.

This is not a place in which one would expect to find one of the world's leading manufacturers of aerosol and dosing packaging. However, with a total of six state-of-the-art production sites and its R&D headquarters, the technology company Coster is one of the region's largest and most attractive employers. Its products are essential packaging components for many of the goods we use every day. Coster produces aerosol valves, dispensers and spray pumps for prominent corporations that are active on the global market with internationally known brand-name products.

From local hero to global player

The company was founded in 1963 in Milan, where its administration and sales departments are still located. It all started with the production of aerosol valves and filling machines. "Nowadays, this line of business is handled by approximately 60 employees. That makes us the world's second largest provider of fully automated and semi-automated filling systems. In addition, Coster is the only company in the world that produces packaging components and filling systems," said Carlo Alberto Zaggia, Group Industrial Director at Coster. Shortly after the company was founded, the future-oriented expansion with the construction of the first plant in Calceranica al Lago, which is officially known today as "Coster 1," followed in 1966. In the past, the region was shaped by pyrite mining. When the mines closed one by one, unemployment shot up and the region was at risk of becoming impoverished, which is why the Italian government created incentives for new industries to establish themselves here. In 1970, the local entrepreneur Rolando Segatta († 2015) took over the company and paved the way for global expansion with a clear vision, a pioneering spirit and a good strategy. "Today, Coster has more than 900 employees, 16 factories in 10 countries and annual sales of approximately €200 million," said Zaggia.

Coster manufactures more than 3 billion valves, pumps and dispensers annually. Along the way, Coster developed many innovations and submitted more than 220 patents. "Customer orientation is not just a buzzword for us, because most of these innovations can be traced back to specific requirements from our more than 600 customers," Zaggia emphasized. A key milestone was the first technical "bag on valve" application that was brought to market in the 1980s. 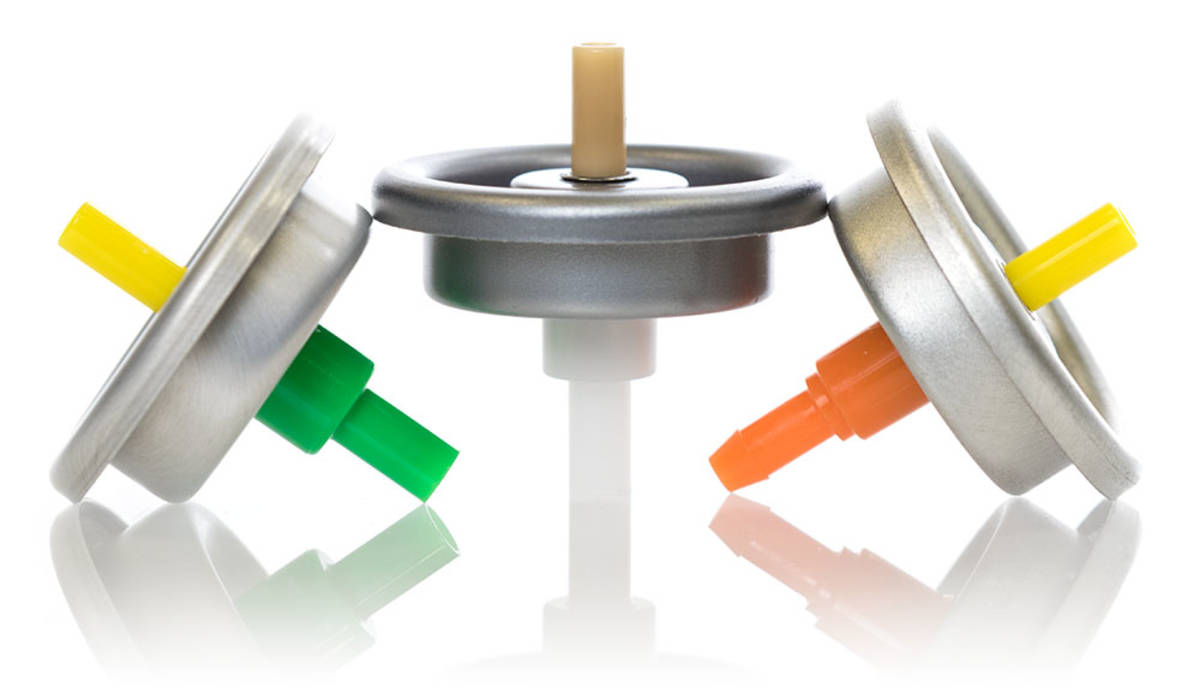 BoV consists of an aerosol valve and a welded bag. The product is in the bag while the propellant fills the space between bag and can. By pushing the spray button, the product is pressed out of the bag by the propellant and is dispensed as spray, creme or gel.

"Under the new management, two main principles of our company remain financial independence and constant modernization of our production systems. On average, we invest 10% of our annual sales in infrastructure," Zaggia explained. For example, in the 1990s, Coster was the first Italian company that commissioned a fully automated production system. Since then, the degree of automation at which aerosol valves are being manufactured at "Coster 3" is 100%. 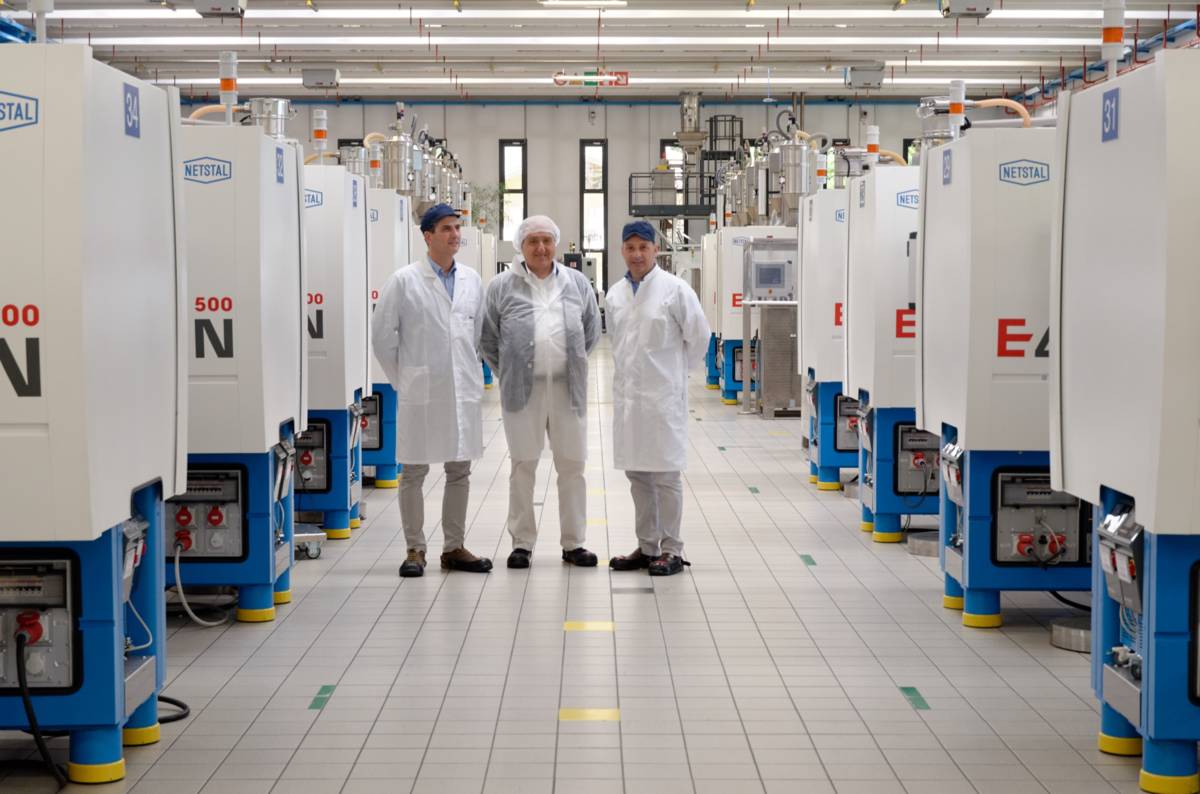 Happy with Netstal's machines and service

Only two employees per shift are monitoring the production. This is particularly well illustrated by the many laser-controlled transport vehicles that supply the required raw materials from the warehouse "just in time" or that transport the semi-finished goods between workstations. The seamless inline quality control and traceability of all products is equally impressive. For each end product, it is documented on which lines the individual components were made and from which batches the raw materials came that were used. Consequently, Industry 4.0 is not a new term for Coster but rather its reality for the past 30 years.

That's why it makes sense that Coster's production fully relies on vertical integration: All components are assembled to form the end product at the site of production. Injection molding is a key part of the process chain, because the products either fully or largely consist of plastic. "We have been working with Netstal since the turn of the millennium and currently use more than 50 ELION series machines," said Nicola Gretter, the plant manager of Coster 3. The very first Netstal machine at Coster was a fully hydraulic SYNERGY. 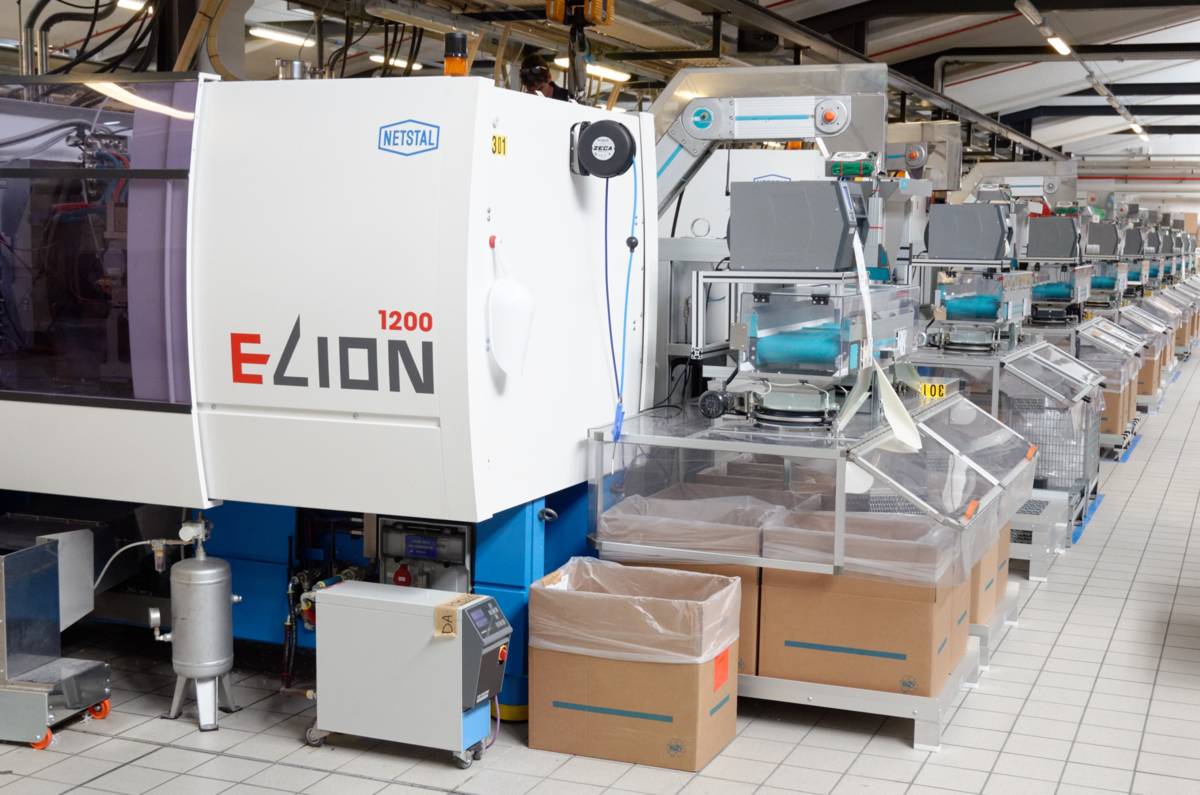 The all-electric machines of the ELION series play a central role in the coster sustainability programme.

Beginning in 2003, the company relied more heavily on Netstal after ELION, the first all-electric machine series, was launched. Netstal is used when the requirements are particularly high and when precision, repeatability and cleanliness are of the utmost importance. With its Netstal machines, Coster achieves high quality, short cycle times and low production costs. Depending on the requirements, the precision parts are either produced inside or outside of a cleanroom.

"A Netstal machine is obviously very precise and completely reliable. There are also hardly any deviations between the machines. That allows us to transfer a specific mold from one machine to the next one and keep manufacturing without having to adapt any parameters," Gretter reports happily and adds that a Netstal machine permits high quality production particularly quickly and easily. In order to get the most out of the machine, Coster also took advantage of the comprehensive training options on offer at the training center in Näfels. "Through Netstal, we were also able to get to know many mould makers with which they had been working closely for years. Over the years, we have benefited a lot from the mutual transfer of know-how, which allowed us to optimize our applications even more," concluded Gretter.

The exciting insights gained at Coster show that industrial production can take place in unexpected locations. Surrounded by an amazing landscape, Coster produces innovative spray packing components for the global market. Therefore, Coster does not just pay lip service to sustainability and environmental protection. Instead, they are important cornerstones of its corporate strategy. Corresponding measures for the reduced consumption of resources are therefore part of all of the company's processes. Three production sites are already operating according to the environmental management system, which is certified in accordance with ISO 14001. In the area of injection molding production, Coster has exclusively relied on all-electric machine technology for years. "We continuously optimize our production lines to achieve maximum energy efficiency. All-electric injection molding machines, like the ELION from Netstal, play a key role in this regard because, compared to hydraulic models, we achieve energy savings of about 50 percent. Apart from that, we value the long service life of Netstal machines. Our ELION machines have been running reliably for many years and hardly cause any problems," said Gretter.