The KE 800 from KraussMaffei Berstorff is the worldʼs largest single-screw extruder. It is used whenever large quantities of plastic are continuously polymerized and extruded. For example, at the facility of a major plastics manufacturer in Texas.

Texas is not only known for large herds of cattle, cowboys and steaks, but also for being the largest industrial location in the US. The refinery sector and the chemical industry account for approximately half of the stateʼs industrial production. And for good reason: Texas provides about one fifth of the countryʼs oil extraction and nearly one third of its natural gas. Texan refineries use 4.6 million barrels of crude oil per day. A large portion of their products are used in the plastics industry.

The giant quantities used here make this yet another perfect job for KraussMaffei Berstorff. This is because the KE 800 single-­screw extruder stands out for its impressive throughput of up to 70 tonnes of plastic per hour, owing not least to its tremendous torque. “Thanks to its simple and robust design, the KE 800 is a machine with maximum reliability that features a low need for maintenance and therefore a high service life. It operates in Texas around the clock, seven days a week,” says Dr. Thomas Preuss of the Processing Department for single-screw extruders at KraussMaffei Berstorff. The KE 800 is supplied by a polymerization reactor. In this type of reactor, monomers (e.g., hydrocarbons) are combined to form long molecular chains. The results of this process are polymers, such as polypropylene, ethylene vinyl acetate or, as in our case, polyethylene. Every polymer has its own property patterns, structure and size, depending on what specific basic monomer types are being used in what processes. In this specific case, we are dealing with an LDPE (Low Density Polyethylene), one of the most commonly used plastics in the packaging industry. This polymer leaves the reactor as a homo­g­eneous, heated mass, which cannot be stored, transported or put through final processing in its current state. However, the plastics processors (the customers of the manu­facturer) need the material in a workable, dosing-ready form, i.e., as pellets. To convert it into this form, we need the KE 800. In this context, it functions as a discharge extruder, which is supplied with the hot melt from the reactor via a filling hopper. 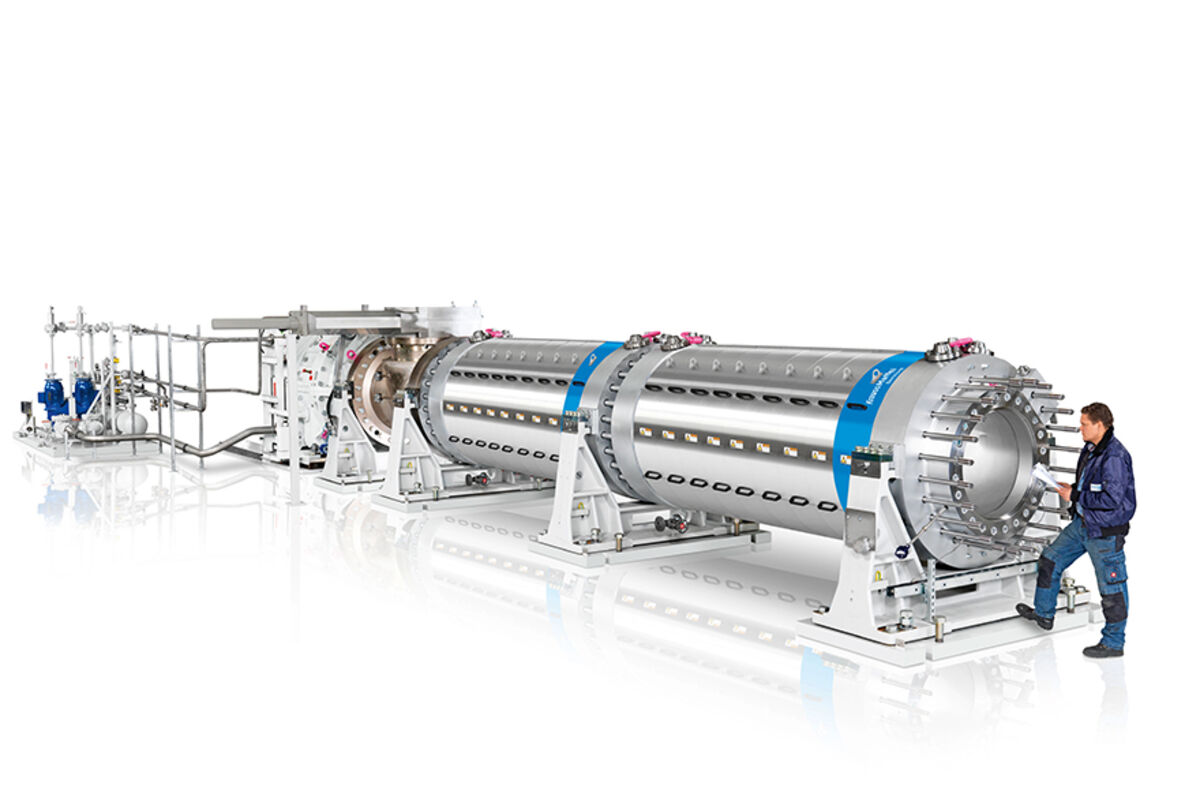 At a total weight of 220 tonnes, the KE 800 is the worldʼs largest single-screw extruder.

The extruder assumes multiple roles here. In synchronization with a side-arm extruder, it handles the task of integrating stabilizing additives homogeneously into the plastic mass. Its main task, however, is to work as a pump to build up the pressure required for the pelletizing process. The cooling effect on the cylinders causes excess heat to be discharged from the melt during the extrusion process. This step allows the melt temperature required for pelletizing to be configured precisely. At the end of the extruder, there is an underwater pelletizer, including auxiliary units, which gives the LDPE its desired pourable, packable, weighable and measurable character. Afterward, the pellets can be stored, packaged and transported.

The machine that achieves this conversion is truly enormous. The screw alone, with its diameter of 80 centimeters, weighs 20.5 tonnes. The gearbox, which brings drive power to the screw at 5,500 kilowatts, adds another 41 tonnes. And at a total weight of 220 tonnes (without the underwater pelletizer), the KE 800 is a heavyweight among even the largest extruders. In fact, it is the worldʼs largest single-screw extruder. The extrusion system is scheduled to undergo final installation at its point of destination near the Gulf of Mexico in early 2018. It will go into operation in mid-2018.