Exuding grandeur; brilliantly white, slightly corpulent with wavy lines to indicate its liquid content. In the shape of its PRELACTIA® PET bottle, PDG Plastiques offers the perfect packaging for milk and milk products. To keep up with high demand, the French bottle specialist is currently expanding its production to include a sixth PRELACTIA® production line from Netstal.

PRELACTIA® is a product of consolidated expertise: Spanish mold manufacturer Molmasa and Netstal developed the technology, while PDG Plastiques brought its processing experience to bear as a front line user. As the only established process on the market to do such, PRELACTIA® effectively packs a liter of ultra-high temperature milk (UHT milk) into 24-gram bottle. The basis for this is a preform with a double layer that reflects the primary functions: an appealing white outer skin to attract the customer's eye and a gray interior wall that is impervious to light to protect the milk. It blocks virtually all light and can therefore also be used for the queen of shelf stability, UHT milk. Boasting a shelf life of up to six months, it places far more demands on a container than extended shelf life milk (around 21 days) or fresh milk (10 days maximum).

"Those who are seeking to reliably fill plastic bottles with milk need look no further than PRELACTIA"
Francois Desfretier, CEO and owner of PDG

PRELACTIA® is all about quality and cost-efficiency, because PDG Plastiques strives to ensure its customers are always provided with the optimum solution. Since its foundation in 1948, the family-run company has constantly focused on beverage and liquid containers. Today the company's 85 employees manufacture around 1.3 billion PET preforms and 50 million bottles every year in volumes of 20 milliliters to 10 liters. The preforms weigh in at between 2.4 and 90 grams. Cooperation with Netstal goes as far back as 1985 and started with a used 150-ton machine. 1990 saw the arrival of the first PET-LINE, with the company now running 21 Netstal machines in total.

From the two-layer preforms...
lightweight PET bottles are formed...
that stand out at the POS. 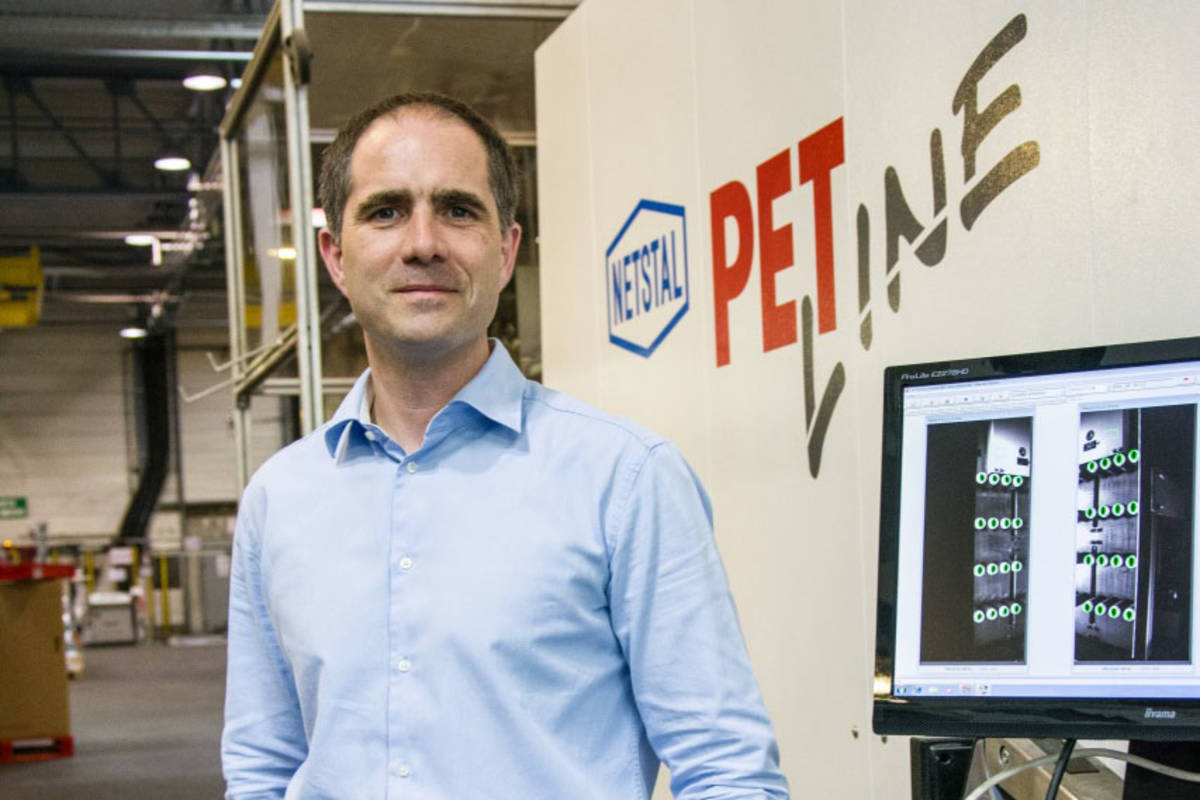 With 85 employees, about 1.3 billion PET preforms and 50 million bottles are produced each year.

Francois Desfretier, CEO and owner of PDG, praises Netstal's reliability and excellent customer service above all else. Following the Drinktec in Munich, where Netstal and Molmasa are joining forces to present the PRELACTIA® technology, the PET-LINE 2C will be delivered directly from the stand to PDG in Malesherbes, where it will continue in production alongside the two existing PET-LINE 2C machines and the three first generation PRELACTIA® systems which were based on the SynErgy series. As the machines are configured for production flexibility, where operational capacity fluctuations arise they can easily also be used for monolayer applications. This merely involves deactivating the secondary injection unit software. For monolayer preforms, 24-cavity to 72-cavity molds can then be put into operation within the machine's performance capability.

In contrast, PRELACTIA® preforms are produced through overmolding, in other words in two steps each using 32 cavities. First the darker component is injected into the mold, then the resulting blank is covered in a lighter outer skin within a separate cavity. This technique enables both layer thicknesses to be precisely defined and generates the greatest value-added in terms of efficiency compared to rival processing systems.  Generally, to increase the barrier effect against UV light, the white pigment titaniumdioxide has to be applied. The additive also ensures the attractive white color of the bottle. In PRELACTIA® preforms the outer layer specifically takes on this role, meaning additive equating to only 5 percent of the preform weight need be applied. Conversely, monolayer PET preforms require around 15 percent additive, which can have an enormous impact on cost. An annual production of 70 million PRELACTIA® preforms at 24 grams each would save a total of 240 metric tons of the high-priced additive. 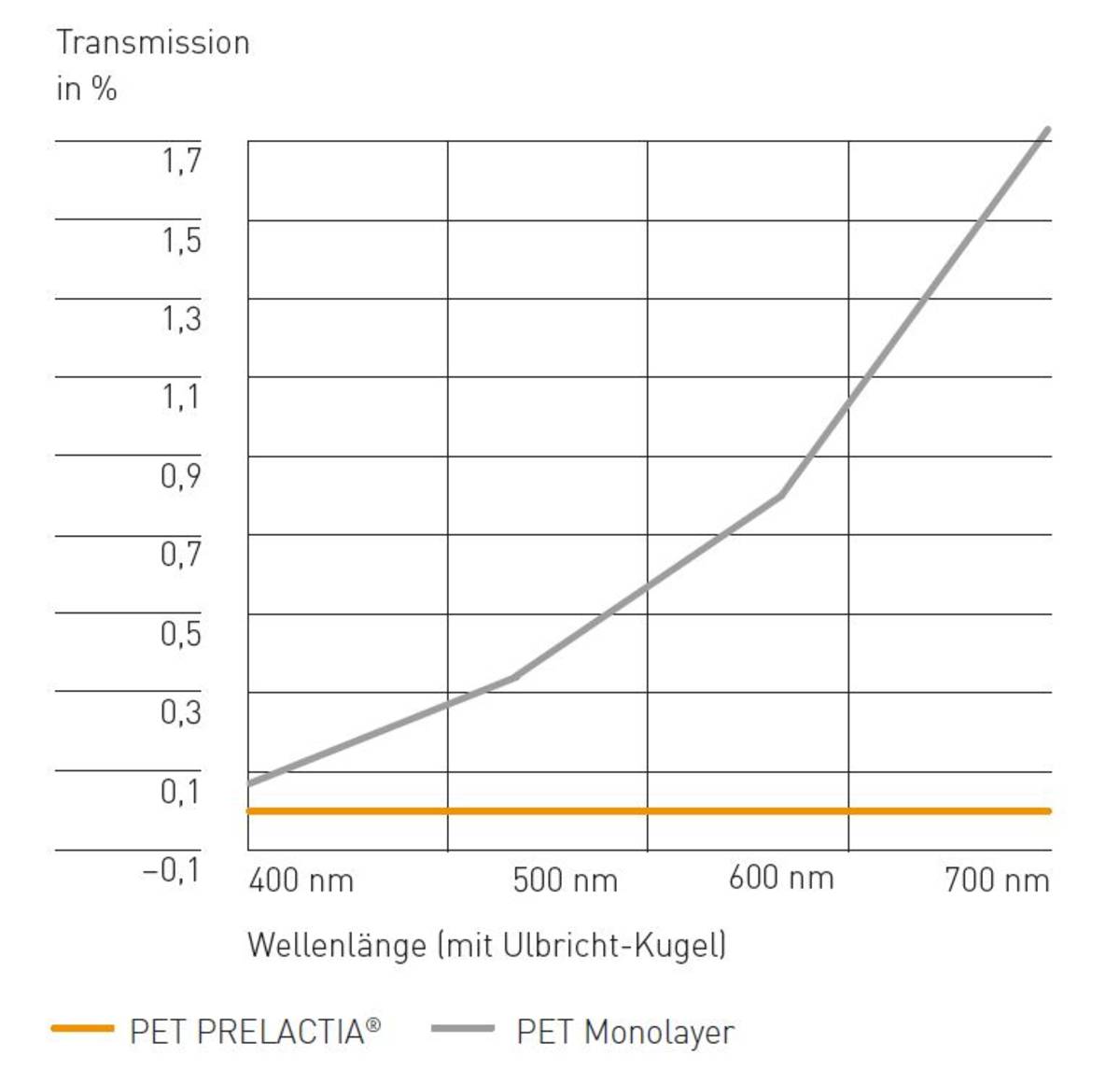 The double-layer design guarantees a highly effective light barrier. Nearly 100% of the visible light (400 nm to 700 nm) is reliably blocked. The result is a shelf life of up to 6 months.

HDPE bottles long-since popular in milk filling are now a thing of the past from a technical perspective; not least due to the heavy weight (30 grams), high material price, minimum light barrier effect and extremely limited scope for design on account of extrusion blow molding. The thread is also frequently a source of sealing problems, which makes the use of an additional seal of aluminum foil necessary. Comparison of the Drinktec application with its 17-gram PRELACTIA® preform against a similar 0.5 litres 21-gram HDPE bottle based on an annual production of 105 million bottles, would generate huge savings in raw materials and additives alone. The market price for PET is around 30 percent below that for HDPE. Those who are seeking to reliably fill plastic bottles with milk need look no further than PRELACTIA®, especially given the fact that the pure PET containers are fully recyclable. Due to the two-stage manufacturing process of the PET bottle, PRELACTIA® opens up additional options for large dairies to stand out from the competition with exclusive bottle shapes. Francois Desfretier is therefore anticipating strong growth and plans to further expand and develop the technology: "Through innovative strength and quality, we aim to set ourselves apart from the competition in future. Netstal is the ideal partner to help us achieve that."

Experience how PRELACTIA preforms are produced on a PET-LINE 2C