The beginning of a new era at KraussMaffei

KraussMaffei is now gradually starting up operations - a decisive step that will lead the company into a modern, efficient and above all sustainable future.

Two and a half years ago, the site in Parsdorf, district of Ebersberg, still consisted of empty spaces, ditches and churned-up soil. In the meantime, several rounds of planning and extensive construction work later, spacious halls and modern offices are rising on the site in the east of Munich. The construction work is now largely completed - and KraussMaffei was able to officially receive the key to its new corporate headquarters. The move to the new premises will be completed by mid-2023. 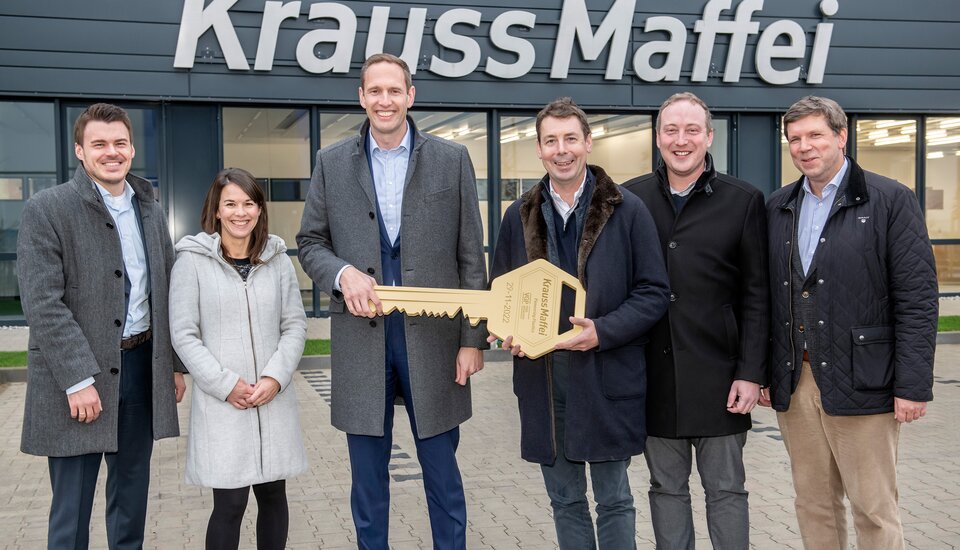 It is a decisive step in the history of the 184-year-old company: The move to Parsdorf not only stands for modern, efficient and above all sustainable production. After almost 90 years at the old site in Allach, it is also the beginning of a new era.

Our move to Parsdorf marks the beginning of a new era for KraussMaffei. We are forming a modern, innovative company that accepts the challenges of the 21st century and masters them with flying colors. With the new locations, we are laying the foundation for further successful years.
Jörg Bremer
CFO and Labor Director of KraussMaffei

In the future, the new location in Parsdorf will combine both KraussMaffei's corporate headquarters and three production halls for injection molding and reaction process machinery, additive manufacturing, mechanical manufacturing and automation, which was previously located in Schwaig, in an area of 250,000 square meters.

One highlight is the new Customer Experience Center, where customers and visitors can experience the entire KraussMaffei world. Among other things, there will be a product and technology avenue, a technical center as well as an acceptance center and training areas. The new complex also offers a number of advantages for employees, including a large canteen and a WorkingCafé, e-charging stations in the parking garages as well as modern offices and new production facilities in the halls.

The entire site is designed for efficiency. Therefore, the infrastructure is designed to enable modern and efficient operations for all areas. Short distances between the production areas simplify logistics and thus reduce throughput times in production. A modern, open office concept enables better communication between the areas.

In addition to efficiency, sustainability is also a focus of the new headquarters: for example, one of the largest rooftop photovoltaic systems in Europe is being installed on the buildings. In addition to the various green strips on the KraussMaffei site, a large biotope is being created to compensate for the sealed area.

The new buildings in Parsdorf are at the heart of the Munich-based company's new location and modernization strategy. This includes the relocation of four plants to modern and larger production facilities. The new plants in Jiaxing near Shanghai and in Einbeck near Göttingen are already in operation. The relocation of KraussMaffei Extrusion from Hanover to Laatzen has also already been successfully completed.